How we do business: A customer experience that can’t be matched

Providing you with the solutions to take your operations to a new level is just part of the picture for BuildingPoint Australia. Underlying everything we do is a peerless customer service system that means any issues you may have will […]

On the road with a new dimension to IDEA StatiCa

Keeping ahead of the curve with Tekla

Even if the closest you’ve come to the former Gold Coast Commonwealth Games Athletes Village is on the drive in to the city, it’s not hard to catch a glimpse of one of the most eye-catching constructions of the 2018 […]

Going beyond business as usual

After being invited to present at a world-leading conference of experts from around the world, and asked to make that presentation again at a national event, if would be a fair bet that John Legge-Wilkinson has something worth hearing about when he talks Tekla.

John, a Senior Structural Technician at Arup, based in their Melbourne office, along with Ajdin Bekiri, a graduate engineer with Arup, backed up from the international Trimble Dimensions conference in Las Vegas in 2018 by presenting at Transform 2019, the three-state conference series hosted by UPG, SITECH and BuildingPoint Australia.

His subject? The use of Parametrics and Modelling for Infrastructure, with a focus on how digital and parametric tools have been used successfully over many years to help deliver major structural and infrastructure projects.

It’s a subject, as you’d imagine, John has plenty of experience in during his 30-plus years in the industry, the vast majority of which have been with Arup.

The global design, engineering and consultancy firm operates in 34 countries, but it’s not just the scale of the business that sets it apart as much as how it is structured.

As John explained, Arup is an independent firm - the business is held in trust, with no individual shareholders or external investors. Those who work for it, as it were, own it.

As a result, Arup sets its own direction, choosing work that aligns with its values. Profits go back into the firm, and are re-invested into research and the many charities and community projects Arup is involved in internationally.

“I’ve been with Arup since 1984,” John said. “I’ve stayed with the company for many reasons but at the top of the list is that it has a culture of innovation with an emphasis on quality and integrity.

Essentially, it’s the people that I work with who have made working here for so long a pleasure.

This company attracts a certain kind of person … working with Arup is about being a part of a team working on projects that are interesting, advanced, and challenging.”

John said the primary message from the Dimensions and Transform presentations had been that for operations to survive, the ‘business as usual’ model had to end and that meant continual evolution.

“The great thing about this line of work is that you never reach the end. There’s always innovation, there’s always something new to explore and adopt,” he said.

“The changes over even just the past decade have been incredible, especially in the tools we are using today.”

Topping that list for John is the Tekla software package.

For the presentations, Arup’s involvement in the Western Program Alliance in Victoria, which is a joint venture between McConnell Dowell, Arup, Mott MacDonald, LXRP, V/Line and MTM, and part of a state government program of works to remove 75 rail level crossings across Melbourne, was used to demonstrate how parametric and BIM tools were adopted from the early design stage right through to construction.

These tools include the use of 3D reinforcement models to help and assist the construction teams in procurement and planning.

“The objective of our team is to change business as usual for the delivery of major infrastructure projects,” John says in the presentation’s overview.

“We have chosen to take advantage of the live link between the parametric tool Grasshopper and Tekla to parametrically model both rail and road bridges, retaining walls and other Infrastructure assets, as well as using Tekla to produce 3D reinforcement models.”

“The use and adoption of these tools and processes is key to our goal of adding greater value and data to our 3D models that can then be used all the way from concept to construction by all members of the team.”

“Use of a parametric process allowed our team the flexibility to deal with design changes and iterations – generating greater efficiencies by saving modelling and documentation time compared to traditional methods.”

This was not the only role for Tekla in this project, however.

“Tekla was used to prepare 3D reinforcement models for major structural components for the bridges and retaining walls,” John said. 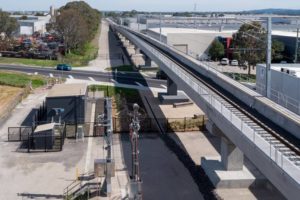 “The reinforcement models were critical to successfully meeting an accelerated construction program - reducing the risk and time required for shop detailing, bar scheduling and procurement.

The successful implementation of these tools and processes has been a great step forward for our teams as we strive to change business as usual.”

Of course, Tekla is not the only software of its kind, however, for John at least, it might as well be…  “We use Tekla simply because it’s the best tool for our purposes,” he said.

“Nothing else is as capable and it’s a proven product that has been used in industry for 20+ years.

Other software may offer similar features and results but none offer the complete suite of tools that Tekla does. Nothing comes close to what we can do with Tekla, and we’ve only just scratched the surface. I’m really looking forward to seeing where we can take all of this in the future.”

How the Constructible Process Will Transform The Construction Industry By 2020. The construction industry is on the cusp of a massive transformation. BIM is no longer enough. The next generation of amazing buildings will need construction professionals to build beyond the […]