Projects with restraints on access, time, and other factors that dictate what, how and when a team can do its work are nothing unusual.

However, for the team from Watkins Steel, a contract to supply and install structural steel and gantry framing in a warehouse for a major beverage supplier in Queensland came with perhaps more than its fair share of limitations.

How they got around them to deliver the project on time and to budget is a testament to the technology the company uses – and the people who use it.

It’s not overstating things to say Watkins is an early and keen adopter of technology in its field. This outlook has been integral to Watkins ongoing relationship with BuildingPoint Australia, who has supplied much of the technology, plus training and support, used by Watkins in this project, among others.

The project, completed between August and November 2017, came with many challenges. 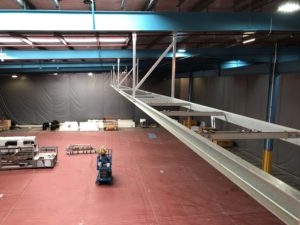 The team were working in a complex existing environment. The warehouse’s existing services, racks and staircases all had to be considered and drawn to in the planning stage.

The team also faced a limited and strict timeframe – there would be no time for errors and to rework to fix them plus at the time of installation they would be working around other trades on the site.

And, unsurprisingly, a considerable amount of site measurement was required to create the modelling.

Watkins Steel’s solutions to these challenges and limitations began with a Faro 3D laser scanner to measure the site, capturing the full internal environment of the warehouse.

The scans were then used to digitally create a 3D point cloud model with the exact measurements of the site using Trimble RealWorks.

And the onsite scanning took just half a day.

Watch this short Video of the HoloLens in action on site.

Using the 3D modelling with Microsoft HoloLens (augmented reality) with Trimble SketchUp Viewer, the Watkins Steel team presented the model to the principle contractor and their client, which gave them a greater understanding of the new design works … proving the old adage ‘seeing is believing’.

This allowed not only the client and contractor but the Watkins teams to readily visualise the end product even before fabrication had started.

“Using the Microsoft HoloLens with SketchUp Viewer allowed us to not only to visualise the project before we even started but gave us a competitive edge when it came down to meeting the client,” Watkins Steel project manager Ben Yu said.

“The HoloLens gives us the ability to have a virtual meeting with the client remotely – improving collaboration immensely. They don’t even have to be on site to see what it looks like.

“The principle contractor and their client were able to see their vision ‘come to life’ from the early stages of the project right through to installation.

“There are so many possibilities for mixed reality in our industry – design & modelling, quality assurance, even fabrication, which we have experimented with using the HoloLens.”

Using this technology meant a virtualwalkthrough could be completed for quality assurance purposes. This was especially important to check the drains and slab were positioned correctly.

Additionally, riggers used the 3D modelling to review the design before erection, helping them visiualise what needed to go where.

Next, the in-house drafting team used Tekla Structures 3D Modelling Software to detail the structural steelwork needed for the project.

Once these drawings were done, the completed Tekla models were imported into the 3D point cloud to check for any clashes and verify that the steelwork was in the right position.

The construction drawings and model were then taken to the in-house production team to handle the processing and fabrication of the steelworks.

The Microsoft HoloLens with SketchUp Viewer was also used at this stage to quality check the fabricators assemblies in the workshop.

During the installation stage, Trimble Robotic Total Station (RTS) was used to ensure pinpoint alignment of the pieces, even down to directing, via laser, where holes needed to be drilled. The RTS utilised data created during the virtual creation stages of the project.

Around 30 tonnes of steel was required for the project.

Despite the restrictions and parameters, Watkins Steel not only delivered the structures on time but no reworking was required. Thanks to the detailed modelling and the use of that modelling right through the project’s life, the structures literally fit like a glove.

As you’d imagine, the client was more than happy with the result.

Creating a home fit for a legend.
Tekla Developer Award 2019 winner shares the secrets of their success
Trimble XR10 is a customised hardhat with a built-in HoloLens
On the road with a new dimension to IDEA StatiCa
Remote Monitoring
Keeping ahead of the curve with Tekla
Going beyond business as usual
SketchUp: Now you’re cooking

We use cookies and other tracking technologies to improve your experience on our website, to show you personalized content/ads, to analyse our website traffic, and to understand where our visitors are coming from.